This morning, bitter rivals met in a long-standing battle of will. Because of their proximity, these rivals know each other well and Showers, the perennial favorite, has done well at holding ground.

What makes Showers so indomitable? It’s the sheer drudgery, knowing that to take down this opponent requires rarely used resources. And, even though victory is so sweet, often results in utter exhaustion.

Based on past meetings, Showers was the heavy favorite, as they often force opponents to walk away in disgust. The mounting losses used to just roll off my back, but lately it’s really been scorching me. I have had enough, the daily taunting, the constant reminders – so I devised a plan of attack.

A new offensive weapon was brought in to the game and after applying constant pressure to the dirty, stained, hard- nosed defense, the force became too much to handle and finally dissolved the opponent. How did I do it? With a new, heavily recruited weapon often called “industrial strength, effective and even friendly to the environment.”

The ability to tackle the tough jobs has become second nature and I couldn’t be happier. The name of this weapon? Simple Green. Some would say it comes with the Good Housekeeping Seal of Approval.

As I bask in the glow of this win, I’m reminded that soon enough, Showers will be back at the old tricks, delivering those ugly reminders that I’ll have to endure again and again. For now, all I can do is ignore it and move on, knowing I have what it takes to clean up next time. 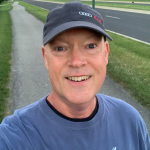